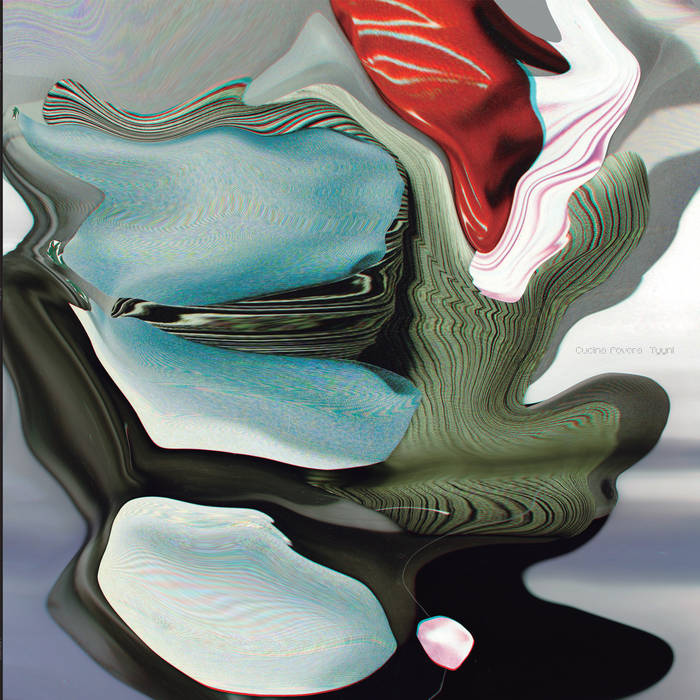 Tyyni is the third album by Finnish-born sound artist and musician Cucina Povera aka Maria Rossi. The second album
recorded using a more studio-based scenario – as opposed to last year’s Zoom, a collection of in-situ, spontaneous recordings
– Tyyni feels like a slowly unfurling mediation on the clash between nature and mechanical living, a rumination on the
complexities of modern life that begin to unveil more about the inner landscape of the artist as it progresses. A Finnish word
referring to still, serene weather, the title belies a new note of turmoil in Cucina Povera’s soundworld. Tyyni represents a
more detailed focus on the sculpting of sounds that curl around Rossi’s hymnal vocal performances. It’s a more adventurous
work than Rossi’s previous output that goes further into noise elements and vocal abstraction while maintaining the balance
and ecclesiastical ecstasy of her debut Hilja.
While tension at the core of Cucina Povera is always prevalent, previously it was organic sounds that were used to
counterpoint Rossi’s singing but on Tyyni these are often replaced with aggressive synths and distortion, profane clashes with
the seemingly sacred hymns. Whether close mic’d and intoning in a loop or in full flight, Maria Rossi’s voice remains in the
foreground, set here against a more synthetic backdrop. This development builds new worlds for Cucina Povera, a digital
environment which brings in a sense of the alien for Rossi’s vocal to duel. The effect is often dazzling. On Salvia Salvatrix, an
ode to the medicinal plant used to ward off evil spirits, Rossi’s invocation is encircled by a distorted synth sound tearing at the
fabric of the composition. It’s an inspired juxtaposition, leaving the listener to appreciate both sounds as separate and as a duet.
Anarkian kuvajainen embraces a sense of chaos, an accidental transmitting mobile phone’s pulse is swept up gently with
looped synth swells as Rossi’s prayer-like vocal rhythmically teases the composition into loops that embrace and then drift
apart. Teerenpeli flirts with a minimal beat rendered by sampler and processed, layered field recordings of capercaillies, while
Side A ends with one of Rossi’s most beautiful, simple tracks yet recorded. Varjokuvatanssi is an a cappela recording built on
top of a wordless glossolalia, a shadowy interplay which foregrounds the solo vocal.
Pölytön nurkka is the most melodic song yet recorded by Cucina Povera. While it still maintains an off-the-cuff performance style,
the synthesized chimes and 4/4 beat are smothered by a distorted synthesizer which almost replicates the bravado of an electric guitar
feedbacking into the night. Rossi’s subject matter talks of trying to start anew, getting rid of extraneous material, perhaps still feeling
powerless to affect positive change. On Haaksirikkoutunut, the protagonist vocal is lost, a vessel rudderless on the ocean, buffeted by
waves metaphorical or real, digital, atonal chords gurgling and splashing against the bow, a storm forever brewing on the horizon.
Saniaiset recalls Coil in its eldritch, nocturnal tone and digital-bell like synth, Rossi’s half-spoken/half-sung voice attaining a creepy
tone before flipping into flight. Album closer Jolkottelureitti uses an escalating, sequenced synth that splinters into both abrasive
tones and harmonising chords creating a kosmische effect, reminding the listener of Kluster or synth-era Popol Vuh, all the while
elevated by Rossi’s searching vocalising.
For an artist with such a singularly unique musical language, Cucina Povera is continually teasing new strands and emotive tones from
an evolving palette. Most importantly, Tyyni appears to be pulling back the veil to uncover an artist finding a synergy between her
own emotional inner world and practice. As such, on her third album, Maria Rossi has found a third way between abstraction and
extraneous emotion, personal experience turned inside out to reveal more about the listener.

Bandcamp Daily  your guide to the world of Bandcamp

Featuring Oakland sounds from the Smart Bomb collective and Samplelov.